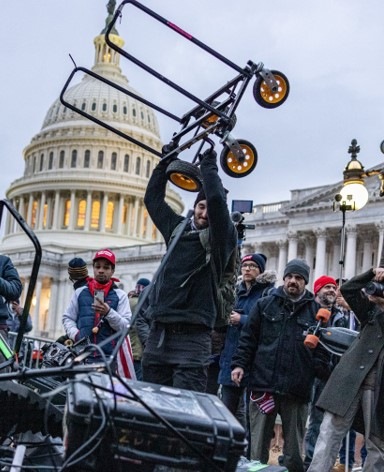 In the early afternoon of Wednesday, Jan. 6, protesters stormed the Capitol building in Washington, D.C. The members of the Senate and House of Representatives were in the middle of certifying electoral votes to officially certify the next President of the United States.

When the news broke  it affected everyone, no matter where they were they heard about the riot.

“So I was actually watching the joint session on the New York Times,” history teacher Kelsey Mayabb said. “They had a live feed, and so I was watching that and all of a sudden, they will they were already in a recess for debates with the objection of Arizona; and then you see that they go into, like the broadcast kind of cuts out well then that’s when we heard about the storming of the Capitol, so I was at school, watching that live.”

It is a First Amendment that America people have the right to protest; however, what term to use to describe the situation was called into question.

Many witnesses around the country were frustrated and concerned about how it would end.

“It was completely uncalled for those at the riots, as well as Trump, need to accept the fact that Trump has been elected out of office. To use violence and threats to try to change that fact is ridiculous,” said junior Ayah Abdelhameed.

Oak Park’s young adults face many different opportunities to shape the future and make a difference. Sartain had a lot to share about his instructions to teachers regarding how the approached conversations about that afternoon.

“Because we practice, we practice equity here. We practice justice in Oak Park. We fall short. You know we don’t get it right, we are not perfect here. And that’s one thing I share with my staff is “Perfect is the enemy of great.”

“You know, yesterday and today, next week and for months and years to come. We don’t have to be perfect in how we respond to, to what happened on January 6, which I think will have a similar connotation to 9/11, you know, in the future.

“First Amendment does not look the same as it does out in the streets in schools, you can’t say awful things to other students…..We can voice our differences and we need to have a way to work through that we need to you know to use processes.

“Embrace values that lead to peace and understanding and acceptance and unity and love and and not to the things that we saw on January 6.

“I see the divisiveness I see the hate. I see the polarity that exists in our society. We have an opportunity to change our trajectory moving forward we have an opportunity to, to create a brighter future than what we’re seeing right now here in America; and it’s our job. It’s not, it’s not something we can stand by and hope happens either as educators. We need to be talking to you about it. We need to be teaching that. We need to be modeling that; need to be showing you how to do it and a lot of those lessons don’t exist in our textbooks, which is really hard.

“We’re going to start spending more time talking to our families and our community and our students about what what we believe about equity and justice here at Oak Park High School and what they can expect from us and what they can expect their students to learn from us, because we can be so much better than we were on Jan. 6 and again this is not about politics. I would have said the same thing if if Trump would have won the election and and Biden supporters were protesting to the, to the degree of, you know, infiltrating our nation’s capital. Yeah, and creating a security risk. It was wrong regardless of, of who they were supporting. It’s not about who they support; it’s about the actions that they did. And we really need to separate that.,” Sartain said.

The events of Jan. 6 came with a consequence. At this time, the House has impeached former President Donald Trump for the second time. According to the New York Times, Trump was impeached for “incitement of insurrection.” Ten Republicans also voted to impeach him.

Even though the house impeached Trump there still has to be a trial as the senators will act at the jury. If both the House and Senate decide to impeach Trump then Vice-President Mike Pence will step up as the 46th President of the United States until Inauguration Day on Jan. 20 and then President-elect Joseph Biden will be the 47th President. If Trump is not impeached then he will remain the President until Biden becomes President.