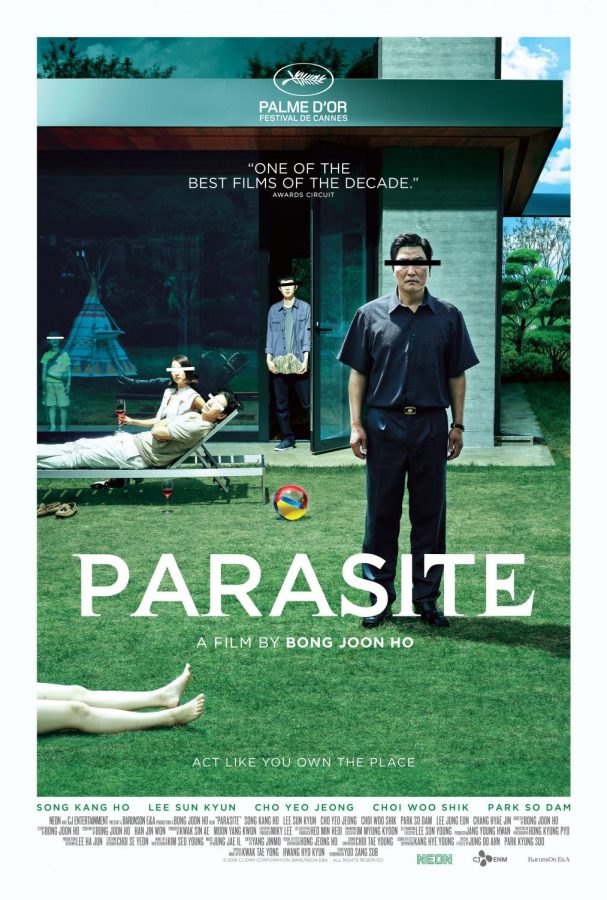 The film ‘Parasite’ was directed by Bong Joon-ho, an award-winning director with many credited South Korean films to his name such as ‘The Host’ (2006), ‘Memories of Murder’ (2003), ‘Snowpiercer’ (2013), and Okja (2017). Bong is currently tied for the record of having the most wins in a single night in Academy Awards history. An honor only shared with Walt Disney in the 1954 Academy Awards only 66 years prior to the 2020 awards.

This film features a cast of talented actors and actresses such as Song Kang-ho (Kim Ki-taek), Choi Woo-shik (Kim Ki-woo), Park So-dam (Kim Ki-Jung), and Jang Hye-jin as (Kim Chung-sook) who portray the impoverished Kim family who would become the anti-hero’s of the film. With also a mention to Lee Sun-kyun (Nathan Park), Cho Yeo-jeong (Park Yeon-Kyo), Jung Ji-so (Park Da-hye), and Jung Hyeon-Jun (Park Da-song) as the rich Park family that parallel the impoverished Kim family in the film.

I interpreted the storyline of ‘Parasite’ as a satirical depiction on classist culture between the rich and the poor. Bong makes sure to establish that message in the symbolism of his film that you could pick up on over time. Since this is a review, the synopsis of the film that doesn’t spoil the entire film is that the impoverished Kim family sneaks their way into working for the rich Park family. The Kim family becomes smitten with the lavish living style of the Park family; however, a series of complications reminds the family where they come from in a way that it all goes downhill for the Kim family like a Shakespearean tragedy.

One of the things that makes the film stand out isn’t only the written symbolism, but the visual symbolism of the film such mixed in with the visual aspects of the film makes this film visually simplistic yet beautiful. The visuals of the film are stunning by mixing both class sides of rich and poor in the city of Seoul, South Korea, which is where the film takes place with the homes of the Kim family which is the reality of the poor in Seoul and the side of the Park family which is the reality of the few rich families in Seoul which I thought was a nice touch.

While Parasite definitely isn’t a PG, family-friendly film since it is rated R. I can only recommend watching with older family and friends since there are some graphic scenes to this film. However, I can easily see why this film has earned awards left and right since this film is artistically well made from the screenwriting to the visual aspects of the film. I would definitely recommend watching this film since it’s just a well done movie that depicts a common social issue of classism that not only relates to South Korean culture but in other cultures as well.