Birds of Prey: And the Fantabulous Emancipation of One Harley Quinn 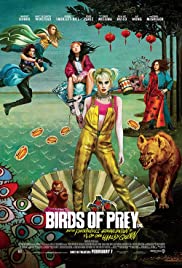 Birds of Prey was an amazing movie. It was released on February 7th and I watched it the next day. I liked the movie so much that I watched it again a week later. It is definitely a rated R movie and not suitable  for younger kids. When I saw the first trailer for the movie I got really excited because Suicide Squad had been my favorite movie for the longest time and Birds of Prey definitely did not dissapoint.

The movie was based off of Harley Quinn played by  Margot Robbie, telling a story. She was explaining what happened after she and the joker broke up and how she really had a huge target on her back all along, but she was being protected because she had been with the joker. Once she announced the breakup everyone that hated her all along decided to take the time to go after her. She even admitted that she was a horrible person to a little girl that she actually ended up saving and protecting. The black mask  was going after this little girl Cassandra Cain after she stole a diamond from the black mask’s right hand man Victor Zsasz and his driver Black Canary after the girl got caught by the police she decided to swallow the diamond. When Victor Zsasz broke the news to the black mask about the diamond being stolen he lost it and went crazy demanding that the diamond would be retrieved.

The rest of the movie was everyone trying to find Cassadra Cain so that they could get the award and so the black mask could get his diamond. Quinn basically let out a whole bunch of prisoners and also hurt some police in the process but Renee Montoya had been after her forever but it’s funny how she ended up working with her together in the end. Quinn wanted to keep this girl safe but she was also fine with trading her for the promise of her safety since the entire city of Gotham was after her. Harley Quinn, the huntress, Renee Montoya and the Black Canary all worked together to fight off The black mask and his army to save this girl. At one point they ran out of all bullets and The black mask had gotten a hold of Cassandra Cain. The Black Canary had a killer voice, which helped kill most of The black mask’s army and Quinn was able to chase down the car on roller skates to save cassandra. They ended up killing the black mask when Cassandra had took the pin out of the grenade and put it in his pocket allowing Quinn to push him off of the bridge that he had taken her to.

After they saved Cassandra and the group was fine they all went out for tacos. When everyone was eating Cassandra and Quinn stepped away and stole a car and then moved to another city.

One of my favorite scenes was the scene when Quinn announced the breakup between her and the joker. My other favorite scene was when Quinn got mad at Renee Montoya after she made her drop and ruin her sandwich.