Floating in to theaters 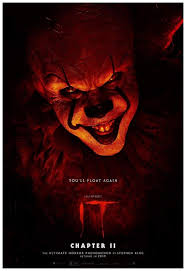 Horror film “IT Chapter II” released on Friday, Sept. 6, and made $185 million worldwide opening weekend. The movie is set 27 years after the first movie to go hand-in-hand with the pattern of the movie.

The movie itself is definitely a time commitment seeing as it’s almost three-hours long however, it’s well worth the commitment if you’ve seen the original movie, read the book, or are a fan of scary movies.

Like “IT,” Chapter II  scattered jump scares throughout the movie. While most of the scenes were predictable, they were all still suspenseful.

The beginning starts with a rather sensitive scene that was both horrifying and sad. The beginning scene was definitely a tearjerker for me but the end of it was chilling.

After character Mike Hanlon convinces his childhood friends to stay in Derry and fight It for good, each character has to find an “icon” to fulfill a ritual. With every icon being found comes an emotional rollercoaster. There were many scenes that brought joyful flashbacks that made me really happy to watch on screen. Though, each flashback turned dark which was not only upsetting, but also frightening